This state of the art facility is located on the west side of Lethbridge and is proudly named the Cor Van Raay YMCA at ATB Centre, built by the City of Lethbridge.

Join the folks at Tourism Lethbridge as they show off the amenities of the recreation centre. 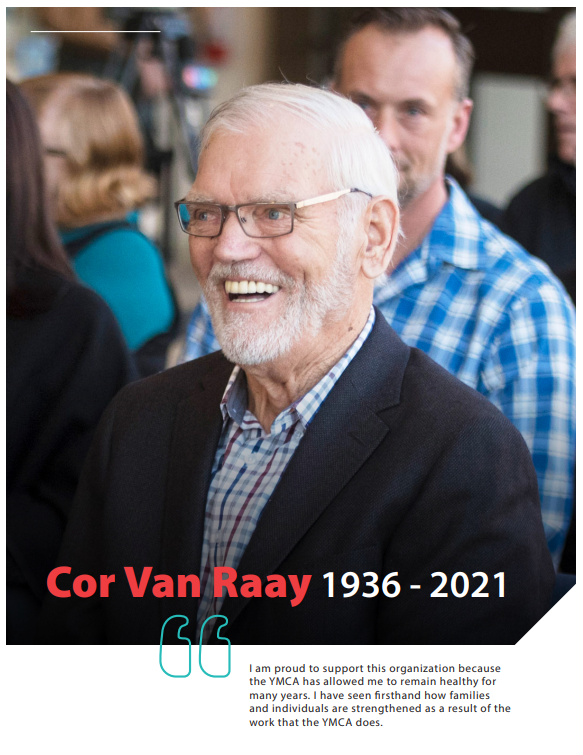 While Cor Van Raay is well known in Southern Alberta for his decades of innovation in agriculture, it is incredibly difficult to speak about the YMCA of Lethbridge without mentioning Mr. Cor Van Raay.

YMCA staff, volunteers and members came to know Cor as a true champion for overall community health, and someone who demonstrated his passion for community through his participation in YMCA programs and his generous giving to our organization.  In his time as a YMCA member, Cor made large gifts to our annual charitable campaign, which allows families and individuals who cannot pay full fees the opportunity to participate in YMCA activities and programs.

Cor’s generosity was not only life changing for the individuals who came to realize improved social, mental and physical wellness as a result of his generosity – as a result of a major philanthropic gift of $3,750,000 in 2017, he transformed the whole community of Lethbridge and area.

With this donation, the YMCA of Lethbridge was able to purchase the fitness and recreation equipment for our new facility in West Lethbridge, the third largest YMCA in North America. We very proudly refer to this centre of community as the Cor Van Raay YMCA.

Additionally, throughout his life, Cor gave large gifts to other local community organizations including the Lethbridge College, the University of Lethbridge, the Interfaith Foodbank, Picture Butte Aquatics Centre, Helen Schuler Nature Centre and Agnes Davidson school, to name just a few. This is always done in a spirit of humility and in a way that inspired others to consider how they can strengthen the community.

In 2019, just a few weeks before his passing, Cor learned that he was to be officially recognized as a member of the Alberta Order of Excellence, the highest honour the Province of Alberta can bestow on a citizen, an accolade well deserved.